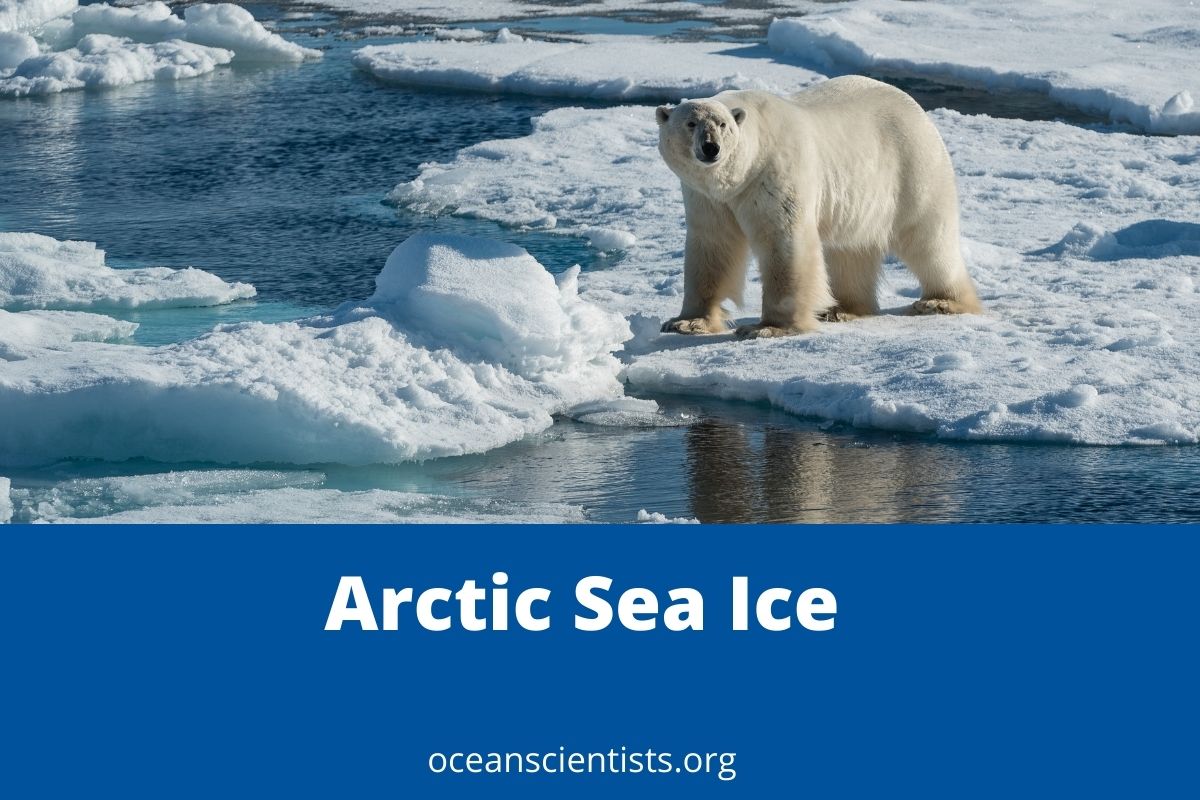 The poles freeze over in the winter and melt in the summer every year. This helps keep the ocean and its currents functioning properly and gives room for many ice-dependent organisms.

This ice is at risk of thinning out and disappearing entirely within the next century due to climate change, global warming, human interference, pollutants, and agricultural runoffs. Keep reading to learn more about Arctic sea ice and its role in the health and wellbeing of the planet.

What is Arctic Sea Ice?

Sea ice is frozen seawater formed in the ocean, which floats on top of the water, primarily in the Arctic Ocean. Each year, this ice forms and melts in a cycle critical to the overall health and function of the planet. These functions help contribute to the global temperature, entire ecosystems, and the ocean’s currents.

The following are some of the influential factors that determine how much ice is formed annually:

During the winter in the Northern Hemisphere, the Arctic sea ice grows until it reaches its maximum size of approximately one meter in thickness sometime around March.

As summer starts to warm the hemisphere, it then begins to melt away again, where it will reach its yearly minimum sometime in September. Should the ice manage to not completely melt, it adds onto itself the following winter and reaches several meters in thickness, and hosts a whole ice-dependent ecosystem by itself.

During the summer, as the ice melts, it starts cracking and opening the way to the open ocean, which helps winds and currents carry this ice vast distances. This ice can then travel until it reaches the coastline, where repeated inflows of ice can build massive layers and pressure ridges up to 10 meters thick.

The majority of this ice will then stick around for at least 10 years before breaking apart and continuing to travel along the currents, where it will either do it again or melt in the warmer water.

Fresh ice typically is a lot thinner than ice that has been building for years and is thus also likely to be the first to melt. However, due to global warming and human interference, the Arctic is seeing a shrinkage of overall ice each winter, increasing the shrinkage in the summer months.

Why is Arctic Sea Ice Important?

Arctic sea ice reflects as much as 90% of the sunlight to reach it up at the very top of the Earth. This helps keep it and the surrounding area cool. As it shrinks, more sunlight reaches the ocean water, keeping it warmer. This warming of the water shrinks the ice even faster. As the Earth is primarily water, the warming of the water helps to warm up the rest of the planet as well.

This ice is critical to the ecosystems, as many sympagic organisms such as bacteria, viruses, unicellular algae, diatoms, ice worms, and small crustaceans use this ice to survive. Without it, they are vulnerable to predator attacks. This is an appropriate cycle for the most part, but the lessening of this ice makes it so fewer of these bottom-rung food chain organisms can survive. This takes a toll on the entire food web.

Additionally, the sea ice provides a platform for more terrestrial animals to rest between hunts. Numerous animals, including polar bears and seals, find it more challenging to survive as time goes on and their hunting grounds don’t reappear during the critical winter months.

There are also the scientific advancements that this sea ice helps with. For example, it helps scientists understand how life might exist on other planets and celestial bodies by providing a model for how various organisms can survive in extreme environments.

What is Causing Arctic Sea Ice to Shrink?

One of the biggest causes of the shrinking sea ice in the Arctic is global warming and climate change. The massive quantities of CO2 emissions released into the atmosphere by humans are also absorbed into the ocean water’s surface. This is then mixed into the water column and helps to both warm the ocean as well as make it more acidic.

This is not the only reason the sea ice is shrinking, however. The Arctic Ocean and its coasts are currently the locations for numerous oil reserves and important mineral deposits such as nickel and copper.

As the ice melts in the summer, it opens up for people to get up there and dig, drill, and build new corridors. This also leads to more hazards such as spilled oil, industrial contaminants, agricultural runoff, and other forms of pollutants to add to the already fragile ecosystem of the area.

How Fast is the Arctic Sea Ice Shrinking?

Should the current CO2 emissions, global warming, climate change, pollutants, agricultural runoffs, and other hazards continue at the rate they are, scientists expect all summer ice to be gone entirely in the Arctic by the turn of the century.

Is There More Sea Ice Other Than in the Arctic?

While the Arctic has a good bit of the Earth’s sea ice year-round, it is not the only place where it forms. For the most part, it appears near the poles, where the temperatures become the coldest. However, some other oceans’ far northern and southern zones also see sea ice annually.

Sea ice has been found forming in these oceans:

Unlike other natural ice forms, sea ice is made entirely on the ocean out of seawater. On the other hand, icebergs come from terrestrial sources such as glaciers.

Ocean currents have a simple way they work. Near the equator, ocean water is heated and travels north along the water’s surface to high latitudes. Up there, it is cold enough that the water becomes denser and sinks to the deep ocean. It then begins to travel south again until it is once again warmed up and rises back to the top to continue the cycle anew.

Unfortunately, due to global warming and the melting of Arctic sea ice, it is causing more freshwater to be added to the seawater, making it less dense overall. This lack of density has caused the ocean currents to slow down and not allow for cooler water to sink and travel further south. This will, in turn, possibly cause disruptions to the ocean currents or even stop them entirely within the next few decades.

What Would Happen if Ocean Currents Stopped?

Despite the fact that warming is causing the ocean’s currents to be disrupted, the slowing or even stopping of them would actually cool down northern regions. This would drop average temperatures by 5-10° Celsius and impact fisheries, as well as worsen extreme weather such as hurricanes and tropical storms.

This also would prevent the necessary movement of the ocean mixing and regulating itself, which could mess with migratory patterns and the marine food web.

As things stop moving, certain organisms stop being able to move. They thus cannot propagate more suitable environments. That will eventually result in their populations dwindling towards extinction.

Would This be the First Time Ocean Currents Stopped?

The problem that the ocean currents are slowing down to the point of stopping is a very real one. It has happened before and has been observed in sedimentary rocks and ice cores by scientists, which further gives insight and understanding as to what might happen in the modern era should the ocean currents stop due to the melting of the Arctic sea ice.

One of the most well-known changes in the climate is known as the Younger Dryas Event, which happened approximately 12,700 years ago. During this event, the ocean currents stopped and cooled the temperature in the northern regions by approximately 5° Celsius.

What Does the Future Look Like for Arctic Ice?

While nobody can actually predict the future, scientists have come up with some plausible scenarios to tell what might happen regarding the arctic ice. No matter how good or bad the scenario is, scientists have determined that by 2050, summer ice will be very thin in the arctic.

Should human-made carbon emissions, pollutants, and damages be controlled in the next few decades, some of the current summer ice within the most resilient areas of the Arctic Ocean should be able to continue to exist indefinitely. This will then help to grow more ice and keep the ocean’s currents moving the way they are supposed to.

Even in this optimistic scenario, there is still a high risk of the ocean’s currents slowing or even stopping altogether. This is because the ocean has a long legacy that can take thousands of years to correct and heal itself. However, in this positive look, the summer ice being kept helps give the ecosystems time to adapt to the changes.

Should human-made carbon emissions, pollutants, and damages continue on their current trajectory, scientists predict that summer ice in the Arctic will disappear entirely by the year 2100. The loss of summer ice also destroys the habitat for many life forms.

Such forms of life that are expected to lose their habitats and potentially even go extinct include various forms of:

The loss of the year-round ice would destroy entire ice-dependent ecosystems and potentially cause entire life forms to go extinct. It is happening at such a rapid rate that chances are, few things will be able to adapt fast enough to cope. Something would surely move in to take its place should the ice disappear, but only if human interference doesn’t get in the way first.

What Can be Done to Help the Arctic Sea Ice?

Scientists are hard at work trying to find ways to study and preserve the sea ice up in the arctic. Unfortunately, in order to do a lot of useful climate studies, the data needs to cover at least 30 years, which has not been done on a large enough scale for long enough to have total accuracy.

Here are some ways that even a single person can help protect the Arctic sea ice:

The most essential thing in preservation is education on the matter. Many people know that recycling is good, but not everyone knows why or what sorts of things it actually helps. Additionally, many people don’t think that one person can really be of use with such large-scale issues as shrinking the Arctic’s sea ice. This is simply not true, and that’s why education is vital.

Arctic sea ice is the ice that forms across the majority of the Arctic Ocean every year. It reaches its height around March and wanes to its minimum sometime in September. This ice is significant for the ocean’s currents, various lifeforms, and marine ecosystems.

Scientists are hard at work studying this sea ice and trying hard to preserve it, though it’s not only scientists who can do something about it. Even reducing an individual’s carbon footprint can help reduce the CO2 in the atmosphere and, in turn, the absorption of it by the ocean, thus slowing the rate at which the ice melts.

Ocean Warming: Everything You Need To Know