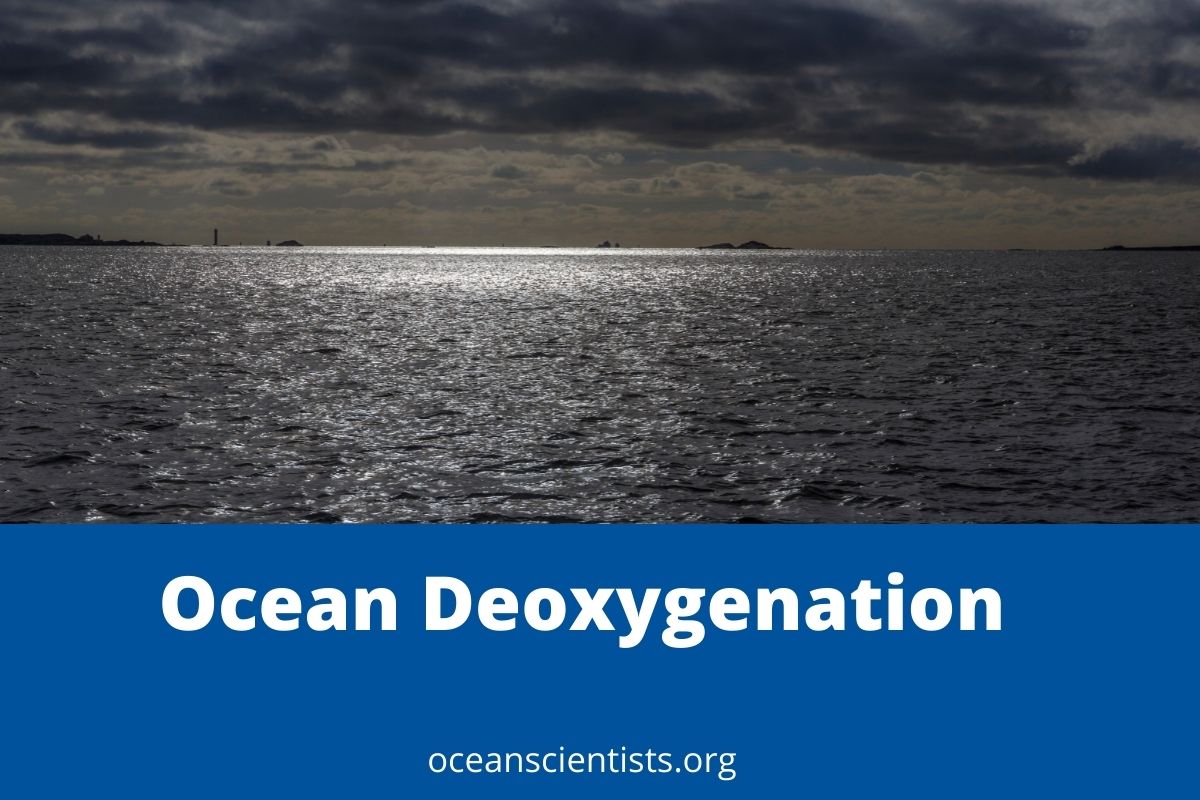 The ocean is inherently an oxygen-rich environment. It is believed that 50%-80% of the earth’s oxygen comes from the ocean (Source: NOAA). Animals and plants that live in the ocean consume most of the oxygen produced. It may not seem like the oxygen level of the ocean has much influence on the land, but nothing is further from the truth. The deoxygenation of the ocean has impacts that reach beyond the water.

What is Ocean Deoxygenation?

Ocean deoxygenation is when the ocean consumes more oxygen than it takes in or produces. When deoxygenation occurs, it upsets the natural balance of the ocean ecosystem. Plants and animals dependent on oxygen are no longer able to survive.

How Does Ocean Deoxygenation Occur?

The leading cause of ocean deoxidization is humans. While humans are not directly removing oxygen from the ocean, their activities are causing the rapid depletion of oxygen.

Runoff: More and more human waste is included in the runoff that inevitably enters the ocean. This runoff contains nutrients and chemicals used on the land. Animal waste is also in the runoff and can lead to ocean pollution.

Nitrogen Deposition: This can be in both dry and wet forms and directly impacts the quality of the soil. When soil quality is affected, the entire food web feels the effects.

Ocean warming: Excess emissions have caused global warming to take place. Global warming has been impacting the ocean for quite some time. The effect of global warming is causing the top level of the ocean to warm beyond its natural point.

How Does Ocean Warming Cause Deoxygenation?

When the ocean warms, it kills the plant and animal life that survives in the upper level of the ocean. As these plants and animals die, it impacts the entire ocean habitat.

Impact of Dying Plants and Animals

It may seem confusing that dying plants and animals could impact the oxygen level of the ocean. You must remember that the process of decomposition requires the use of oxygen in the water. If you have a situation where many plants and animals are dying, the amount of oxygen will be significantly depleted.

The depletion of oxygen begins a vicious cycle in the ocean. Without oxygen in the water, several other plants and animals will start to suffer and die. As the decomposition worsens, an entire section of the ocean can become a dead zone.

Dead zone: A dead zone in the ocean is a location that can no longer support and sustain life. As climate change continues to disrupt the natural order of the ocean, dead zones are becoming more and more prevalent.

Can an Ocean Dead Zone be Repaired?

Ocean dead zones do not have to be permanently destroyed. However, the process to bring these areas back to life will take the cooperation of industry and citizens to resolve the issue.

The only way to get around a dead zone is to allow the oxygen levels to increase to a level that can support and sustain life. You can accomplish this by significantly limiting the number of emissions released into the air.

If ocean dead zones are not repaired or slowed from forming, there are nearly 500 million people at risk of losing their jobs or income source as it relates to the ocean. (Source: Global Citizen.org)

Where is Ocean Deoxygenation Happening?

Ocean Deoxygenation is happening around the world. The areas where the most significant levels of ocean deoxygenation have been found are:

Sometimes, ocean deoxygenation impacts areas that already have a naturally lower level of oxygen in the water. Typically, these areas have a high population and agriculture and industry that significantly impact the water and oxygen level.

What Impact Does Ocean Deoxygenation Have?

Ocean deoxygenation has a significant impact on the ocean’s life, but you may be wondering just how far-reaching the effect is. Let’s explore some of the impacts it has.

When the ocean’s oxygen levels begin to decline, it begins to limit the types of animal and plant life that it can sustain. When this occurs, the effects are not only felt on the surface of the ocean, but they begin to filter throughout the entire biosphere. It impacts the food chain and essentially disrupts many levels of life.

Animals and plants can only survive where their basic needs are met. When an animal or plant cannot meet its needs, it will often move to a new location or cease to grow in that area. Because of this, there is an uneven distribution of plant and animal species in the ocean.

Algae blooms have become a significant issue recently. Often referred to as the “red tide,” rapidly growing algae blooms can be toxic to both plants and animals in the ocean, but they can also impact humans on the land.

Algae blooms can cause shellfish to become unsafe to eat and cause beachgoers severe skin irritation. Often, areas with algae blooms are closed to swimming and fishing because of their dangers.

Many fisheries rely on the ocean to keep their stock. If the ocean lacks oxygen, they cannot maintain the proper environment for their fisheries and will lose a lot of their stock that would typically be sellable.

The ocean provides food for people around the world. If ocean deoxygenation continues rapidly, the amount of fish available will rapidly decline. With the rapid decline in availability will come an increased price. Ultimately, it will cause several fishing businesses to stop because they cannot cover the cost of harvesting the fish. This will impact not only the fishermen but consumers.

Can Ocean Deoxygenation be Reversed?

Unfortunately, ocean deoxygenation cannot be fully reversed, but it is something that can be slowed if the right actions are taken.

What Impact Does Global Warming Have?

Global warming has a significant impact on ocean deoxygenation. When the water temperature rises, the amount of oxygen in the water is significantly decreased, especially in the upper level of the ocean. Because of this, the animals and plant life that naturally live there cannot survive. When life begins to die on the surface, there is an increase in algae formation.

If ocean deoxygenation is so prevalent, you may be wondering how the progress is tracked. There is a very scientific method of tracking deoxygenation that uses Earth system models as well as other monitoring systems. Essentially, the models follow the rise and fall of oxygen levels in the water around the world.

How Can Ocean Deoxygenation be Stopped?

Limit HFCs: Hydrofluorocarbons (HFCs) are commonly used in coolants and other refrigerants. HFC’s were introduced in the early ’90s and have increased in popularity as the need for coolant and refrigeration has increased. Along with this increase, greenhouse emissions have also increased.

It is projected if HFC use continues on the same trajectory, the amount of greenhouse gas present in the atmosphere will double every five to seven years. The increase in HFCs will result in a rapid rise in global warming.

Adjust the oil and gas collection method: Oil and gas wells are notorious for adding pollution to the ocean, increasing ocean deoxygenation. Because of this, there have been safeguards put in place that force oil and gas well companies to rapidly repair leaks as well as use safer methods to capture the gas and oil.

Not all decisions or recommendations made by the EPA are widely accepted but necessary if the change occurs. Here are some of the things the EPA is looking at and researching to help reduce nutrient pollution.

Reducing nutrient pollution is a huge undertaking that will take the effort of everyone to help make a difference. Slowly, chemicals are being pulled from shelves, and new; safer alternatives are being introduced.

Ocean Deoxygenation doesn’t necessarily cost money as it is occurring, but it has a detrimental impact on businesses that rely on the ocean and ocean life for sustainability. When the ocean begins to suffer, the companies will naturally suffer the consequences.

To stop ocean deoxygenation from occurring, it will cost industrial businesses money to put safeguards in place to help limit the amount of pollution that is going into the ocean. Not only will these processes take money, but they also take time to implement.

How Can Industrial Areas Help?

Perhaps you are wondering how the industry can help reduce their emissions, which in turn will help reduce the speed of ocean deoxygenation. Here are some of the things that can be done to help limit the number of emissions from industry.

Form of energy used: Industrial buildings require a tremendous amount of energy to power their machines and day-to-day production needs. The increased energy needs are typically met with the use of fossil fuels such as petroleum and crude oils (Source eia.gov). The three most commonly occurring and widely used fossil fuels are:

Depending on the cost to obtain each of the fossil fuels, some are more widely used than others.

Why Are Fossil Fuels Bad?

Fossil fuels are naturally occurring in the environment, but the method of harnessing their power along with the emissions they release is problematic. Because fossil fuels are non-renewable, meaning they cannot be replaced once they are gone, the limits are being pushed to collect them.

Fossil fuels have a very high rate of greenhouse gas emission when they are used, which is significantly impacting global warming, which in turn is increasing the rate of ocean deoxygenation.

Many industrial businesses are looking for more cost-effective and environmentally friendly energy options to use. While there is a high up-front cost to make these changes, they will pay dividends in the future. Here are some of the options being explored by industries around the world.

Wind Power: Using wind power to operate factories and other areas reduces the amount of electricity that is produced by fossil fuels, thereby reducing the overall emission rate.

Water Power: Some industrial locations have been able to use water power to help generate energy. Again, this helps limit the amount of energy taken from fossil fuels.

While all these options seem viable and straightforward to implement, there are things that make them challenging.

Each of these methods of powering an industrial location is expensive to install, and depending on the weather in your area, they may provide inconsistent energy. For an industrial facility, consistency is key to its business success.

The effects of ocean deoxygenation are far-reaching and are globally impacting. By reducing the use of hydrofluorocarbons and implementing forms of clean energy, we may be able to reduce the rates of deoxygenation. However, reversing the issue will take time and consistency to see a change. If we neglect to reduce ocean deoxygenation, the area of dead zones will increase, and a reversal may be impossible.

Arctic Sea Ice: Everything You Need To Know